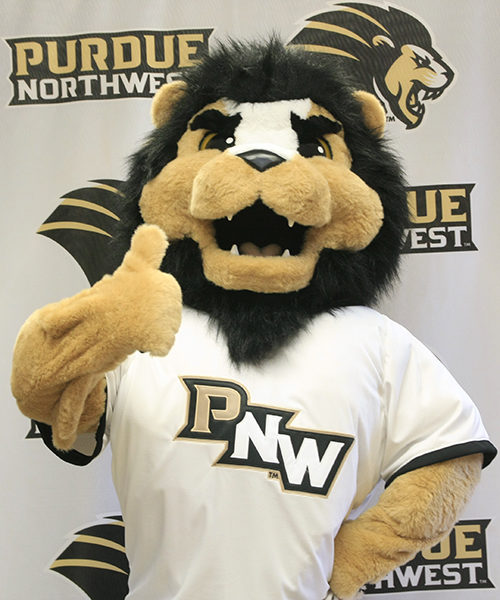 Leo the Lion is PNW’s current mascot. In 2016 both campuses combined and became The Pride, leading to the creation of Leo the Lion who represents both Hammond and Westville locations.

Students are familiar with Leo the Lion, the front-man mascot for the PNW Pride. They may not know that Leo is only the latest in a long line of school mascots.

“If you count both [campuses], we have had seven different mascots,” said Joseph Coates, PNW’s archivist.

In the late ‘70s early ‘80s, the university switched to the Lakers.

“It was really unique,” Coates said. “It was sort of named after Lake Michigan and being close to the Great Lakes.”

The Laker was a significant departure from Peter Piper. It was symbolized by an anthropomorphic wave poised in a fighting stance.

The Laker remained the mascot until the early 2000s, when the university switched to the Peregrines.

Meanwhile, Purdue North Central, which has become the Westville campus, has had two mascots: the Centaurs and the Panthers.

“The Centaur was basically part horse and part Purdue Pete,” Coates said. It looked similar to Purdue Pete and Peter Piper, but with four horse legs and a tail.

“Around the same time the Hammond campus switched from the Lakers to the Peregrines, the Westville campus became the Panthers,” Coates said.

The panther was named Pounce. It was Westville’s mascot until it merged with Purdue Calumet to form PNW in 2016. The new university took the mascot name of Leo the Lion to represent the Pride.

Coates said this mascot is likely to be around awhile.

“We are one university now,” he said. “We are all the Pride.”