Editorial: Pride cometh before a fall: 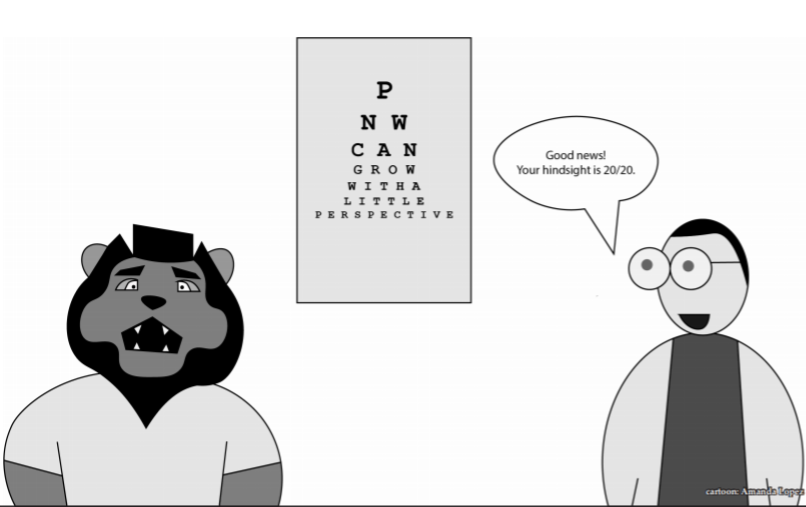 Westville class cancellations, travel requirements and growing frustration from faculty and students. Although at odds with the future-focused language of the university since unification, it’s worth asking: How did we get here?

The truth, it turns out, is in-line with the recurring themes present in PNW’s short history: failed reciprocal communication, unilateral decisions and the placement of pride before recognition of fault.

The recent Faculty Senate meetings have provided a microcosm of such behavior, with faculty raising concerns about the imbalance between the two campuses and the future of the Westville campus in general, and administrators retorting that hostile perceptions from faculty and staff and a failure to adequately champion the Westville campus have resulted, at least partly, in its current state. During urgent situations such as this, blame is usual, but implicit in the blame is the question of accountability: Why didn’t we see any of this coming?

In many ways, proper assessment by administrators before unification should have vetted the stability of two institutions that had vastly different enrollment demographics; especially one for which dual credit students accounted for more than half of the enrolled population. Moreover, proper assessment and research should have pointed out the potential risk involved in combining two institutions with different strengths, weaknesses and enrollment figures, and the even higher risk of operating said two institutions with a one-size-fits-all approach.

The list of ‘should haves’ is long and tedious and not all that useful now, however. In truth, many faculty, staff and students have moved on from unification-induced frustrations in the three and a half years since, focusing instead on improving the institution in whatever incremental way possible. What remains present in the attitudes of faculty, staff and students, though, is an unwavering mistrust toward PNW’s administration.

In fact, a shared committee of PUC and PNC Faculty Senate members petitioned for an independent impact study before unification, to ensure that the decision to unify was realistic and informed, according to Faculty Senate archives. The administration, however, ignored the Senate’s request. Instead of having known then the potential pitfalls of unification, faculty from both sides are now figuring them out in realtime; more often than not, in a blind-siding fashion. There is no question as to why mistrust has made its way into every decision facing the Faculty Senate this year; past decisions sowed it.

Instability and a lack of foresight by administrators marked the beginning of PNW; such actions don’t have to continue to mark the university, however. One thing is true: both PNW campuses can survive. But there is still, despite many efforts, work to be done. Work that in some ways cannot be accomplished until there is a shared recognition of the past faults, current imbalance and the need for improved future planning with adequate faculty input.

So, how did we get here?

Perhaps it was the combined failure of multiple administrations to assess the weaknesses of both campuses before unification. Perhaps a lack of value placed on faculty input resulted in the ignoring of many red flags. It’s true: we cannot go back. But we could have started in a more well-educated and informed place.

The more urgent question still looms: where do we go from here?

According to our past mistakes, the emphasis should be on the collective ‘we.’ Mistakes provide learning opportunities, and PNW’s long list may be what propels a robust and stable future – that is, if we choose to recognize and learn from them.